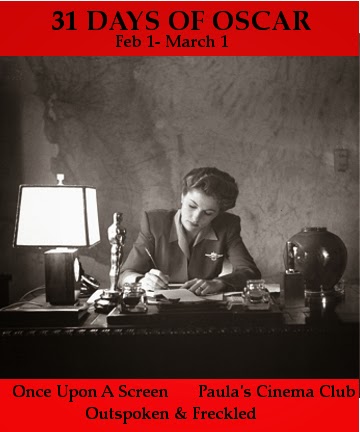 We have now entered into the 2nd week of the 31 DAYS OF OSCAR BLOGATHON! Aurora (@citizenscreen) of Once Upon A Screen, Paula (@Paula_Guthat) of Paula's Cinema Club and Kellee (@IrishJayhawk66) of Outspoken & Freckled bring you this mega blogathon celebrating the very best in cinema! To coincide with Turner Classic Movie's (TCM) month-long broadcast of all things Oscar, 31 Days of Oscar... 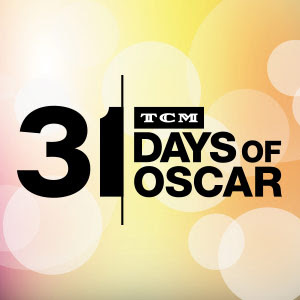 The blogging trio decided to amp up the fun to this year's event by adding a different theme to each of the five weeks. And for this 2nd week, we celebrate all the various contributors that add flavor to a film... the writing, musical score and songs, costumes, choreography, the cinema photography, art direction... basically, anything goes this week. With so much emphasis generally placed upon the performances and overall direction of a film, we wanted to devote a week to all the talented artists and craftsmen of film that don't always receive such a bright spotlight. And yet, we all know these masterpieces would not be the classics they've become without them. So now we humbly sing their praises!

First up, we get all glammed up as Kimberly (@GlamAmor) from GLAMAMOR brings us her latest entry for Style Essentials with "Ava Gardner is Dressed to Kill in Vera West for 1946's THE KILLERS"

CAFTAN WOMAN (@CaftanWoman) revisits the fourteen original songs introduced by Bing Crosby, nominated for Best Song Oscars over the course of his film history in "Sing A Song of Oscar"

Kelly (@popcornnmovies) of ...ON POPCORN AND MOVIES devotes her post to the beautiful 2005 film adaption that practically swept all the "art" categories with six Academy Awards nominations, "MEMOIRS OF A GEISHA... in need of no words..."

THE VINTAGE CAMEO (@vintagecameos) waxes melancholy on the Oscar categories that have gone extinct with "Forgotten Oscars: Best Dance Direction"

Constance from SILVER SCENES Blog joins in with a delightful tribute to the entertaining editor with perfect comedic timing best known for his Disney films, "Editor- Cotton Warburton"

Victoria (@miss_vicki) of GIRLS DO FILM offers up a wonderful review of two films of the same story with Oscar winning results like Best Art Direction and Best Costume Design with, "The Spectacle of MOULIN ROUGE"

Angela (@MaterialGirl850) over at THE HOLLYWOOD REVUE orchestrates a melodic perspective on the magical relationship between film and song with, "The Power Of An Original Song"

Thanks so much to all of our wonderful bloggers for contributing their splendid write-ups! Be sure to read and comment on their blogs. Here's the full schedule of each themed week...

That's right- with three more weeks to go, there's still more time to join in the blogging fun! Since we're taking turns hosting, you can submit topics either by leaving comments on any of our blogs, via twitter or by email.  We kindly ask that you please include the following:
It would also be great if you can include any of the event banners included in this post on your blog to help us promote the event.
SO – write to your heart’s desire!  Write one post or several on each topic.  But write!  And join us.