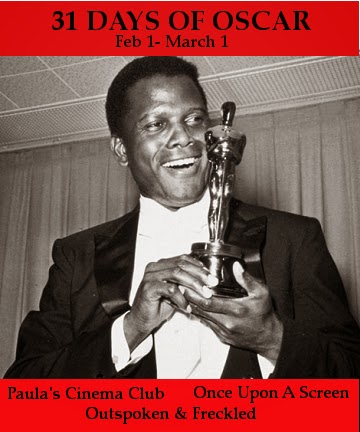 The 2nd annual 31 DAYS OF OSCAR Blogathon has begun! To coincide with Turner Classic Movie's (TCM) month-long broadcast of all things Oscar, 31 Days of Oscar...

Aurora (@citizenscreen) of Once Upon A Screen, Paula (@Paula_Guthat) of Paula's Cinema Club and Kellee (@IrishJayhawk66) of Outspoken & Freckled bring you this mega blogathon celebrating the very best in cinema! The blogging trio decided to amp up the fun to this year's event by adding a different theme to each of the five weeks. For our first week, we're kicking it off by honoring the talented contributors of film who, despite arguable evidence to the contrary, were passed over for the coveted Academy Award.

So, here is a list of our talented participating bloggers asserting their best arguments in support of those unrecognized, we now bring you... "SNUBS."

Next, our 31 Days of Oscar Blogathon co-host Aurora (@citizenscreen) of ONCE UPON A SCREEN brings to light, "The Snubbing of Barton Keyes." In review of the overlooked performance of Edward G. Robinson's iconic role in Double Indemnity (1944), Aurora writes: "Robinson’s depiction of the ruthless, irritable, funny, big-hearted, insurance adjuster with the “little man” who lives in his gut that serves as a warning when some claim seems “off,” is unforgettable."

Ruth of SILVER SCREENINGS (@925Screenings) offers up "Oscar Snub: Gunfight at the O.K. Corral." In defense of the screenplay that never received the Oscar nom, she adds, "The script has all the hallmarks of a great western: memorable lines, interesting characters, and authentic-looking sets."

The Gal Herself of ONE GAL'S MUSINGS discusses the Oscar snubs of Richard Burton in "Richard Burton's Bad Luck with Drunk Cowboys."  As she describes his predicament- he was "tormented by the choices he'd made... Burton believed that an Oscar would be tangible evidence that it all had been worth it."

A PERSON IN THE DARK gives us the "2 Oscar Snubs That Really Irk Me." FlickChick has "a list of gripes and grievances a mile long" but she's chosen to "just share 2 of the snubbed ones that really, really irk me" with the performances of Jean Hagan as Lina Lamont in "Singin' In The Rain" (1952) and Robert Preston as Toddy in "Victor/Victoria" (1982)

ImagineMDD (@ImagineMDD) evaluates the obvious oversight of "Bringing Up Cary Grant and Oscars" with a detailed breakdown of his remarkable yet snubbed performances. With 72 films- many as popular then as they remain now- it's hard to believe he only received 2 noms for Best Actor?!

Next up, Kelly (@popcornnmovies) over at ON POPCORN AND MOVIES provides a delicious serving of the many snub highlights over the years of Oscar history in "What Do You Want... Awards or Iconic?"

One of the lovely Metzinger sisters, Connie, at SILVER SCENES Blog builds a compelling case for the snubbed yet grand sets in the film "Suez" (1938), "Set Design - Suez" (1938)  As Connie points out, "it remains an entertaining and thrilling spectacle."

Next, Marlee of PICTURE SPOILERS reveals a biopic view of Marion Benson Owens aka Frances Marion for her unsung works in The Second Annual Muse Awards: 31 Days of Oscar Blogathon

Minoo on the CLASSIC MOVIE HUB BLOG justifiably argues for Oscar Snub- Myrna Loy. As Minoo scribes regarding one of Loy's most memorable roles... "The fact that Loy wasn’t even nominated for this touching, poignant and truthful performance is certainly one of the Oscars’ biggest snubs."

Finally, fellow 31 DAYS OF OSCAR co-host Paula of PAULA'S CINEMA CLUB passionately protests the Oscar Snub: Barbara Stanwyck in STELLA DALLAS. As Paula astutely observes, "I also think the realism of Stanwyck’s performance may have been another contributing factor. She is always so natural, and almost never seems to be acting."

Thank you for taking the time to read these fabulous SNUB posts from these participating bloggers. And be sure to let them know your '2 cents' by leaving a commentary on their blogs. There's still plenty of time to join the other weeks of 31 DAYS OF OSCAR...

Since we are taking turns hosting, you can submit topics either by leaving comments on any of our blogs, via twitter or by email.  We kindly ask that you please include the following:
It would also be great if you can include any of the event banners included in this post on your blog to help us promote the event.
SO – write to your heart’s desire!  Write one post or several on each topic.  But write!  And join us.