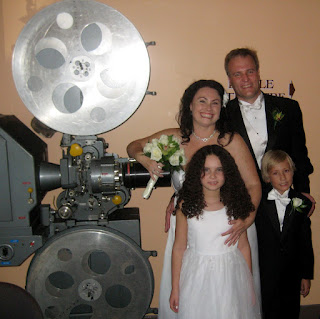 Some people have passion for classic film. And a few people love classic film so much they celebrate it as a theme for their wedding. I can happily claim both. For those of you who may have discovered in a recent podcast I co-hosted on the recently disbanded The Cinementals, I revealed that I was married in a classic film wedding.

I've always loved movies. The experience of seeing a new blockbuster on opening weekend or watching DVDs from my personal collection is always a thrill but watching classic films has been a true passion of mine since childhood. About five years ago, I was a single Mom and decided to check out online dating. I was on Match.com for only a few days when I read a profile that intrigued me. His bio revealed someone who was intelligent, creative, funny (his profile photo was a picture of a squirrel) and loved classic film. After asking for a real photo followed by a couple of weeks of daily email exchanges that turned into late night phone calls, we had our first date. We were instantly smitten. After 6 months of dating, he asked me join him on a trip. As he was completing a work trip in NYC, I flew out to join him so we could enjoy a couple of days in the Big Apple. While standing in front of a painting we both admired at the MOMA, he nervously reached into his pocket, pulled out a diamond ring and asked me to be his wife. After gleefully accepting his proposal, the planning began.

When discussing wedding plans, our first concern was location. As we stood in front of our favorite local theatre house where we had seen countless films together, Liberty Hall; we knew exactly what to do. To share our love as a couple with all our family and friends, it made perfect sense to celebrate with our shared love of classic film at this beautifully historic theatre house! Liberty Hall has a rich and diverse history. Started in 1852 as the Herald of Freedom Abolitionist Newspaper, it was burned down to the ground and rebuilt that same year. After years as a town meeting hall for political debate, it later re-opened as a theatrically themed opera house. In 1911, it was updated in a lush Grecian style with tiled flooring, chandeliers and stained glass windows. That paved the way for silent film era and the showing of D.W. Griffith's controversial THE BIRTH OF A NATION (1915). Years later, the first showing of a film with sound was THE CANARY MURDER CASE (1929). This history-rich location has served as an opera house, a disco club in the 70's and movie theatre from the silent era to today's releases. We knew it was the ideal venue for our classic film themed wedding. While we collected classic movie items to pull together an Old Hollywood theme, my soon-to-hubby was secretly creating a movie of his own, as a gift to me just for the occasion. When the big day arrived, our names were displayed on the marque out front and all the white linen tables were decorated with cinema centerpieces. Each table had it's own miniature movie projectors festooned with gold stars. On each star we hand-wrote the names of famous Hollywood couplings from Fred Astaire & Ginger Rogers to Bud Abbott & Lou Costello to Doris Day & Rock Hudson. The ceremony itself took place on the stage with attendees given the option of floor or balcony seating. At one point in the ceremony, my fiance surprised me with an impromptu paparazzi- unbeknownst to me he gave each groomsman his own camera to create the ultimate Hollywood opening night experience as they showered me with shuttering camera flashes and shouted my name to smile for the camera. This paparazzi interruption only lasted a few brief moments but was serendipitously hilarious and a brilliant touch. In addition to a buffet of appetizers, we offered movie popcorn and concession style candies like Junior Mints and Raisenettes. One of the best parts of the reception was the mini movie my hubby created and played for all to see on a big screen. It's a wonderful string of movie clips and text that tells the story of how we met and fell in love. ( I'd love to share the video with you all here but due to copyright infringement, I can only share privately.) Dancing followed the reception until the wee hours and I can proudly say the bride and groom were the last ones to leave the dance floor.

The love of classic film is a shared passion for my husband and me. It's one of the many things that brought us together and we continue to enjoy together with almost as much passion as we have for one another. I highly recommend having a classic film themed wedding for any cinema fan. And for any of my fellow film fans interested in planning a cinematic experience for a wedding, feel free to contact me for tips!
Posted by Irish Jayhawk at 10:35 AM No comments: