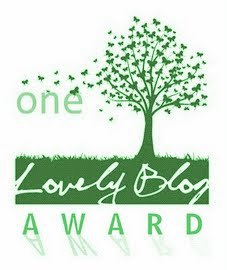 Recently, I was honored to hear I was awarded with the "One Lovely Blog Award" by the lovely "Movies Silently" blog. I'm a big fan of this silent film centric blog so I was all the more delighted hear the feeling was mutual! Fritzi Kramer (aka @MoviesSilently) is the tea-sipping, book-reading and silent-film-obsessive creator of this cozy and informative home of "Movies Silently." She gladly shares interesting articles, reviews, biographies and gifs. While her main focus dwells on American films from the silent feature period: 1915-1929, she also plans to cover some foreign silent, remakes, and homages to silent films, as well as later period silent films. She clearly adores silents but engages in an accessible way- to enjoy with all fans, from newbies and aficionados alike.

How this "One Lovely Blog Award" works:


1. Add the “One Lovely Blog Award” image to your post


3. Pass the award on to seven nominees


4. Thank the person who nominated you and add a short blurb about them.


5. Inform the nominees by posting on their blogs
Now, Seven Things About Me:

1. My tastes in film are ECLECTIC.
That's not to say I adore everything. But yes, I do love many, many films. I find that my appreciation in cinema ranges from silents to the most current films. (I generally go to opening weekends of most films.) I love pretty much every genre and sub-genre of film... westerns, spaghetti westerns, Sci-Fi, monster Sci-Fi, Horror, drama, silents, film noir, suspense thrillers, musicals, romance, action, indies, foreign... you name it. But comedies are always my favorite. From Mack Sennett slapsticks to 30's and 40's screwballs to something more modernly raunchy or dark like SEVEN PSYCHOPATHS (2012). Yeah, pretty darn diverse.

2. I Hate Sad Endings.
I know that's not real life. But I don't care. Anything truly vile or depressing in a film better be followed by some serious reversal of fortune on one level or another. It's the optimist in me. See, in real life, I'm probably one of the best survivors you'll ever meet. Optimism has been one of my key strengths in my knack for surviving. If I find out beforehand that there's a film with a deeply downer theme and/or a horrific ending, I generally try to avoid it. It's not that I don't appreciate it on an intellectual level, I truly do. There's just too much pain in this world. I use cinema as my escape.

3. I love prop planes in classic films.
I love old planes. Two-seaters and biplanes especially. Both my grandfathers were life-long pilots. They loved flying and it's in my blood, too. My mom's dad was a WW2 bomber pilot; flew 30 missions in the U.K. alongside the Brits, spent his career as an Air Force officer and retired young. But sadly, he died at age 47 so I only knew him from stories as I was 3 when he died. I knew my paternal grandfather better. He also spent WW2 working with planes- but as an aviation mechanic in the South Pacific. After the war, he spent a career with FAA inspecting planes all over the country. Upon an early retirement, he spent years rebuilding antique style  air planes from scratch. I loved to watch those planes being built. We'd often go to fly-ins and air shows in the blazing heat of Kansas summertime as I'd tuck under the shade of a wing while Grandpa chatted away with all his flying buddies. I loved it so much I portrayed Amelia Earhart in the school talent show, all dressed up my grandfather's pilot gear. What a dorky little kid I must have been. I anxiously counted the days until my 14th birthday then I ran out to my grandpa's hanger and exclaimed, "Grandpa! I'm 14 today! Do you know what that means?!" Grandpa: "Yes, I know... that you're a year older?" Me: "It means I'm finally old enough that you can now teach me to fly. I can start taking flying lessons!!" Grandpa: "Don't be silly. You're a girl." Of course I immediately ran off to my grandmother and cried in bitter disapointment. Despite my grandfather having six daughters and only one son, he clung to a few antiquated ways of his time but I still admired his passion and skill for flying.

They say I was in a small engine plane by 6 weeks old. And my mom even helped out when they needed a wing-walker for an air show or two (few gals were that tiny, brave and completely at ease with aerobatic flying maneuvers as dear mum). So whenever I see those old classic planes in films, I tend to light up a bit. I guess my aviation love is not exactly a secret because not that many months ago, a dear twitter pal and true "Old Movie Weirdo" Will McKinley (aka @willmckinley) graciously surprised me with a signed copy of  William Wellman Jr.'s 'The Man and his Wings: William A. Wellman and the Making of the First Best Picture. (By the way, Will has a fantastic and popular blog- "Cinematically Insane" and I highly recommend you check it out.) " It's a mesmorizing read that's an homage to his dad, "Wild Bill" Wellman's bio and how that fascinating early life influenced the making of WINGS (1927). I'm still trying to summon the courage to blog upon that beautiful gift, but fear not being able to properly give it the justice it deserves. But I will attempt to give it my best shot soon. (And in case you were wondering, yes- I do plan to get that pilot's license still- in a few years when the nest is bit roomier and hopefully my pocket book will be less roomy.)

4. I want hats and gloves to make a comeback.
Oh how I long for those accessory-driven styles from the Golden era of Hollywood. I ADORE hats and gloves! There was a time prior to sunscreen and central-air temperate lifestyles where hats and gloves were not just glamorous but also held a purposeful function. Additionally, I love the look of the fur accessories, but I do NOT agree with the unwarranted brutalization of our furry animal friends to achieve a "look." Which is why I say bring back that exact same sumptuous sophistication with faux fur! My grandmother left me all her furs when she passed and as much as I appreciated her style, I felt too guilty about fur to accept. I'm not a vegan or a member of PETA, but I'm a guilt-motivated work in progress.

5. As an outspoken, strong woman, I love those same sassy types of ladies on the big screen. But  we need to see SO many more.
Don't we though?! Let's face it, when you think of all the female characters in film, the ones with the most snarky responses, those that are the opposite of the compliant wallflowers, the ones that truly hold their own- these are the most appealing and popular roles, are they not?? Would Rosalind Russell's Hildy be as nearly captivating if she didn't equal Cary Grant's Dexter in verbal jabs and excel in reporting better than any man in the press room? Would Harrison Ford's Indiana Jones be as attracted to Karen Allen's Marion if she wasn't an intelligent, adventure-seeking fearless female who held her own in fighting off Nazis? Would William Powell's Nick be as intrigued by and madly in love with Myrna Loy's Nora if she'd rather stay home, instead of urging Mr. Charles to take on complicated cases as she sleuths right along with him? While times have improved over the decades, there are countless more examples of women in film who ultimately sacrifice for the man, even to this day. I'd love to see that change. Think of the wondrous possibilities.

6. I have a solid list of films that I watch whenever I need a "pick-me-up."
THE GREAT RACE (1965), IT'S MAD, MAD, MAD, MAD WORLD (1963), ARSENIC AND OLD LACE (1944), THE THIN MAN (1934), BRINGING UP BABY (1938), any Marx Brothers comedy and pretty much any Busby Berkley musical are all examples from my standard list of the films I can count on whenever I'm blue, stressed or simply need an emotional escape. I think most true film aficionados have lists like this. Different films than mine likely but a short list of what picks them up when they're down. For many of us film freaks, in addition to being introduced to cinema via someone who influenced us at often a young age, escapism is generally the biggest motivation.

7. I love movies so much I was married in a movie-themed wedding.
So for my final personal share (even though most of my blog followers likely already know this), my passion for film was reflected in my wedding day theme- yes, it extends THAT far. I'm happily married to a fella who "gets me" and even shares my personal passion for movies. We're a blended family and the 2nd marriage for each of us so when we planned for the special day, we knew we wanted to celebrate with less tradition and more focus on FUN. For all the fun details of how we blended our love for cinema into expressing our love for each other, check it out here.

Although it is simply unfair to narrow down to only seven when there are SO many amazing blogs, I offer up seven of the many amazing bloggers below. Now here are my nominees of some quite lovely bloggers to pass on this special award...

1. Jessica of Comet Over Hollywood blog (also known as @HollywoodComet on twitter) explains, "classic film shaped our society, pop culture and our knowledge. There would be no glamor and Rodeo Drive without Cecil B. Demille’s first farm house that he built in a barren Los Angeles in the 1920s." Well said, Jess!

2. Judy of Movie Classics blog (aka @MovieClassicsWP on twitter) scribes her thoughts on older movies, especially those from the 1930s to 1950s, including a special interest in pre-Codes, gritty Warner Brothers movies and director William Wellman.
3. Patricia (aka @CaftanWoman on twitter) is faster than a speeding scooter! Able to leap tall dust bunnies in a single bound! It's CAFTAN WOMAN - cozily clad film fan and blogger of movies and life...the Caftan Woman blog
4. Ruth of Silver Screenings blog (aka @925screenings on twitter) and as she says, "classic movies are good for you, like chocolate eclairs or a trip to the spa. You should never let a week go by without enjoying at least one of these."
5.  Chicago gal One Gal's Musings blog's goal would be as Wilbur described Charlotte, "a true friend and a good writer." I'd say she's already made it.

And a good blog list would be incomplete if I didn't include my charismatic compadres and blogathon (WHAT A CHARACTER! and 31 DAYS of OSCAR) co-hosting co-horts...

6. Detroit gal Paula of Paula's Cinema Club (aka @Paula_Guthat on twitter) is a life-long cinema fan, co-founder of the popular #TCMparty tweet-along TCM experience, and proprietor of the St. Clair Cinema Club. Busy gal and sweet friend with a great blog!

7. My Cuban cinema-sister Aurora of Once Upon A Screen (aka @citizenscreen via twitter) is currently NOT seeking the 12 steps program for her classic film, TV and radio show obsession. Instead, she unabashedly continues her postings and we're all the more entertained for it.

Be sure to check out all these blogs above and enjoy some entertaining and informative writings! Thanks again, Fritzi!