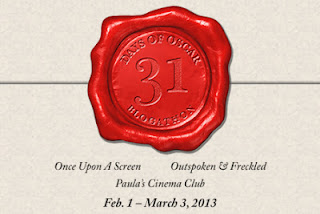 The red carpet is rolled out, the limos are lined up, the Harry Winston jewelry and hottest designer gowns are perfectly fitted and the envelopes are sealed ... it's time for Oscar. Well, almost. To add to the building excitement of this momentous showcase of the very best in cinema, Aurora of Once Upon A Screen (aka @citizenscreen) and Paula of Paula's Cinema Club (aka @Paula_guthat) and myself decided to follow along with Turner Classic Movie's month long tribute, 31 Days of Oscar with our very own 31 DAYS OF OSCAR Blogathon.

And to kick off the very first week, here are your bloggers' contributions and passions on what inspires them for Oscar...

1. Vanessa of "Stardust" at http://www.bwallover.blogspot.ca  gives us a glimpse into Hollywood's famed golden year (indeed it was!) in "Hollywood's Triumph: 1939"  (tweet Vanessa at @callmeveebee )

2. Co-host Aurora of "Once Upon A Screen" at http://www.aurorasginjoint.com delights us with Oscar "Firsts"  and her own Oscar memories that highlight why the Oscars still matter. (tweet Aurora at @citizenscreen )

3. Lindsey of "The Motion Pictures" at http://www.themotionpictures.net treats us with TWO entries! First up is "Oscar recollections: 10 favorite Best Actress winners"
... what a wonderful list of leading ladies. Next, Lindsey takes on the opposite gender with her list of talented leading men ...  "Oscar recollections: 10 favorite Best Actor winners." (tweet Lindsey at @TMPLindsey )

4.  Pete of "Furious Cinema" ... http://furiouscinema.com also spoils us with TWO entries! First up is a personal fave of mine (I've seen this THREE times already and yes, the "D" is silent)
"DJANGO UNCHAINED" then he flips into classic Chicago gangsta-style with "Little Caesar" (tweet Pete at @furiouscinema )

6.  The Gal Herself of "One Gal's Musings" ... http://onegalsmusings.blogspot.com
shows us it's a Battle of the Blondes or Girls Gone Wild! with "1960 Best Supporting Actress"

7.  David of "Be Careful! Your Hand!" ... http://becarefulyourhand.blogspot.co.uk
charms us with a contentious collection of animated amazing features: "Oscars: Best Animated Feature 2009- Who Should Have Won?"   But why stop there? David adds ANOTHER blog entry- to celebrate the unsung category of voice talent with "And The Oscar for Best Voice Acting Goes To..."   (tweet David at @DavidOpie )


8.  Ratnakar of "Seetimaar- Diary Of A Movie Lover" ... http://seetimaar.wordpress.com
composes a beautiful symphony of a cinematic Mozart masterpiece in "Amadeus"   (tweet Ratnakar at @ScorpiusMaximus )

10. Murtaza of "A Potpourri of Vestiges" ... http://www.apotpourriofvestiges.com serves up "The Silence of the Lambs (1991): American Film- Maker Jonathan Demme's Case Study on Human Psychology" with some fava beans and a nice chianti. ( tweet Murtaza at @apotofvestiges )

Please savor these delicious blog entries as contributed by our blogger extraordinaires. This is only the first week and we are already brimming with talent. Be sure to add your feedback to these blog entries, follow along with TCM's 31 Days of Oscar this month and stayed tuned to our 31 DAYS OF OSCAR Blogathon in the weeks to come for the very best in Oscar blogging fun!

Cinematically yours,
~Kellee (aka @IrishJayhawk66)
along with Aurora ( @citizenscreen ) and Paula ( @Paula_guthat ) 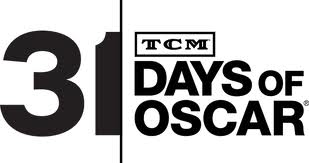 Posted by Irish Jayhawk at 7:06 PM