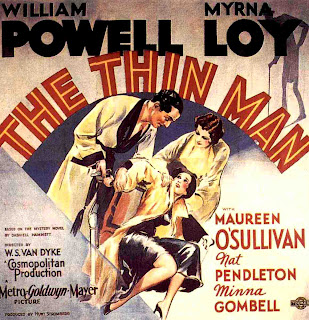 To celebrate a Summer Under The Stars day devoted to Myrna Loy, I enthusiastically chose to commit a blog to W.S. Van Dyke's THE THIN MAN (1934).  Turner Classic Movies is devoting the entire month of August to "Summer Under The Stars", where each day solely reflects programming to a specific star of classic cinema. This Thursday, August 2nd you can enjoy THE THIN MAN at 11pm EDT plus many more Myrna Loy films on TCM all day long!

THE THIN MAN is the first entry in a collection of a total of six films of the enormously popular characters Nick and Nora Charles, portrayed by William Powell and Myrna Loy.  Although already well-known and experienced actors, THE THIN MAN and subsequent Thin Man series films launched William Powell and Myrna Loy into super-stardom...with good reason.

Nick Charles is a former detective who returns to town with his new bride, Nora Charles, a wealthy heiress and their lovable wire-haired terrier, Asta. In introducing our lead threesome, we see that Nick is charismatically and deeply charming, Nora is adorably sophisticated and fashionable in an unpretentious style and Asta always provides comic appeal on his own terms. We also quickly realize that Nick and Nora take social drinking to an all-new level. This two are not mere occasional hobbyists but true professionals in martini shaking and party-throwing. And most of all, we see Nick and Nora's flirtatious and playful love for one another lights up the screen with authentic and magnetic chemistry. 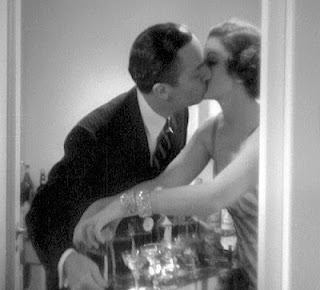 Based on Dashiell Hammett's novel of the same name, the "thin man" actually refers not to Nick Charles but to the missing 'tall, thin man with white hair' Clyde Wynant whom Nick Charles seeks throughout the film and whose mysterious disappearance is central to the plot. Clyde's daughter, Dorothy, played by pretty Maureen O'Sullivan, becomes worried about her inventor father's absence. Dorothy's step-mother is found murdered and her father quickly becomes the main suspect so she begs Nick to take her case. With Nora's thirst for thrills and adventure, she convinces Nick to come out of retirement and return to his sleuthing ways. As Nick follows leads, we are introduced to Dorothy's eccentrically odd family and circle, and the suspicious characters replete with motive begin to pile up. The police decide to work in cooperation with Nick in pursuing the case, but not before Nick and Nora throw a party so we can meet Nick's ole cronies and witness a typical heavy bender. What's revealed in this little party besides the Charles' high tolerance for cocktail consumption and their generosity in hosting, is that Nick Charles is admired and respected by both the police and the street-wise criminals he's worked with through his prior cases. (Upon surveying the room of colorful guests, Nora Charles says: "Oh Nicky, I love you because you know such lovely people.") Finally, when the police are convinced the wrong man is responsible, Nick convenes a dinner party for all possible suspects to attend and the ultimate whodunnit revelation showcases Nick Charles' brilliance in detective mastery.

THE THIN MAN is such a favorite because of the brilliant chemistry between William Powell and Myrna Loy. They're both perfection in these fun roles. With their quick witty banter and confident ease in exchanges, they each wear their roles comfortably as a custom-fit glove. The dialogue is sharp; and makes me chuckle and smile, every single time I watch. Here's one example of the many zingers... Nora Charles: "You know, that sounds like an interesting case. Why don't you take it?" Nick Charles: "I haven't the time. I'm too busy seeing that you don't lose any of the money I married you for." Only William Powell could portray the ever-charming, while heavily intoxicated party host one moment then a brilliant mastermind detective the next, all while casually flirting with his beautiful wife. And only Myrna Loy's calm confidence and beauty could balance the sophisticated socialite who's acquired a taste for the adventure and thrill of her husband's gritty profession. Myrna Loy truly epitomized the consummate combination of beauty and brains.

For me, when watching this charming gem, there is one thing that sums up the delightful relationship of Nick and Nora Charles sublimely... the scenes when Myrna Loy playfully scrunches up her nose at William Powell and he returns the gesture in kind. If you haven't seen THE THIN MAN yet, I urge you to get those martini shakers ready and tune in this Thursday and see for yourself- I guarantee it won't be your last.