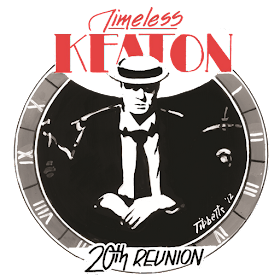 I'm a classic film fan. Not a historian, not a film critic. I've only taken one film class in my life. It was about 20 years ago while a Communications student at the University of Kansas. So while I do not profess to be an expert in film, I've always been a passionate fan. And if the wisdom of living this long teaches one anything, it's that we cannot avoid our passions. We follow our passions whether through vocation and education or otherwise. As such, I found myself following my passions again this weekend with the paths leading me to Iola, Kansas to the 20th Buster Keaton Celebration.

I'm a Kansas native. But I lived in Taos, NM for a chunk of my childhood- from ages 8-14. In Taos, there was a local arts center that also offered screenings of silents and a few 'talkies' of classic comedies on Saturday mornings. I was enthralled by those showings such as: Our Gang, Laurel and Hardy, Keystone Cops, Abbott and Costello. In the last half decade, I've explored my passion for classic film more deeply (including blogging about it.) And more recently, my desire has come to learn more about the origins of classic film and especially within my favorite genre of comedy, silent film. 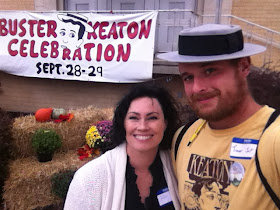 In February earlier this year, I discovered through fellow twitter pals and silent film aficionados, Trevor (see us above) and Nikki (aka @tpjost and @nikkilynn4), the Kansas Silent Film Festival. By attending this delightful cinematic experience, I discovered another Kansas silent film tradition- the Buster Keaton Celebration. This year marked the 20th year of the Keaton Celebrations.

The event takes place in Iola, Kansas; about an hour and half drive from my house and about seven miles from Pique (pronounced "pick-way'), Kansas- birthplace to Buster Keaton. I felt fortunate to attend the 20th year as much of the event was a nod to the past 20 years. Before this weekend, I knew little about the event other than it was free and an annual 2 day line-up devoted to Buster. I figured I had nothing to lose beyond a pretty drive through the Kansas countryside in Autumn.Wow, was I pleasantly surprised.

My first surprise hit me when it became clear that the Keaton Celebration is just that- a celebration, not a film festival. Unlike a film festival which is often a series of film screenings with introductions, this 'celebration' is a true tribute to the man and his work. This year included a schedule of educational lectures from college professors and Keaton historians from across the country, the Founders' panel recapping highlights from the past 20 years, a Keaton family panel with 3 family members, and a film historians'/preservationists' panel. And, yes, there were a few Keaton screenings, as well. 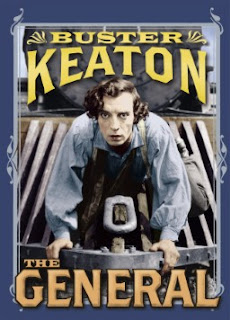 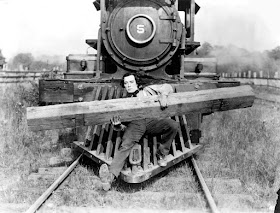 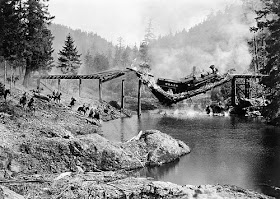 I found the panel discussions and lectures informative and fascinating. It was a revealing lecture by Dr. Brian Johnston of Indiana State University that Keaton's/co-directed by Clyde Bruckman's THE GENERAL (1926) was based on a true event in history. Only Buster Keaton's genius could turn thorough planning and research of this historical event into an enduring classic work of comedy. Somehow, that historical significance was unknown to both me and my silent film enthusiast, Trevor. That background history made the Saturday evening screening of THE GENERAL (1926), on the big screen and with live orchestral accompaniment by the Mont Alto Motion Picture Orchestra, even more spectacular. 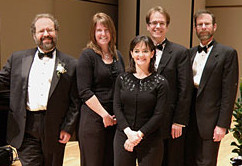 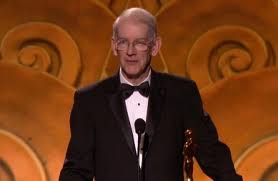 One of the highlights was the appearance and candid discussions by film historians/preservationists' Kevin Brownlow and David Shepard. British filmmaker, director, editor, producer, author and silent film expert- Brownlow is one of only a few film preservationists in history to win an honorary Oscar by the Academy of Motion Pictures and Sciences. From his restoration work at the AFI to his own Blackhawk Films Library, Shepard is a renowned for his restorations and quality video production of a long list of significant silent films. To be in the same room with these folks whom are so responsible for the restoration of Keaton's work and countless other silent and rare film treasures, I was undoubtedly awe-struck.

What a treat to listen to the very personal stories and see family photos of Buster Keaton from an intimate point of view from Barbara Talmadge (daughter-in-law), Harry Keaton, Jr. (grandson) and his grand daughter, Melissa Talmadge Cox (clearly the favorite grand child). You could feel the very personal and affectionate welcoming in that auditorium. This was so much more than a schedule of film screenings- it was more like a friendly reunion of close family and friends mixed with all the college classes you wish you had taken, but never did. 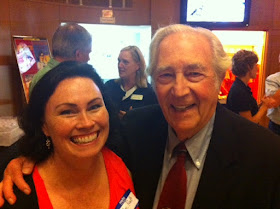 Another surprise to me was the number of celebrities that have attended and continue to appear at this gathering in a small town in Kansas. This year's noteworthy celeb was award-winning actor and long-time friend of Buster's, James Karen. He was kind enough to pose with me. I posted the photo above, which reflects me awkwardly blushing and a bit star-struck, as he had just complimented me with, "always happy to take a picture with a beautiful woman." Of course, that was the icing on the cake after an enlightening weekend. Some of the celebrity appearances from past years' include: famous film critic/ writer/ and producer, Leonard Maltin (year 1996), Steve Allen (in 2000, who impromptu played piano after his discussion yet sadly passed one month later), Edie Adams (in 2004, to graciously take the place of her recently deceased husband Ernie Kovacs, a longtime friend and colleague of Buster's), and family members of W.C. Fields, just to name a few.

Overall, it was a magical experience that I plan to make an annual tradition. I was happy my husband joined the 2nd day and I know he especially enjoyed the rare Keaton showings up on the big screen. See their site for the full schedule and details on the Buster Keaton Celebration: http://iolakeatoncelebration.org/. Oh, and one more serendipitous moment... it turns out that a key Keaton Celebration organizer who also has provided most of the artwork for their posters is Kansas City film historian and multi-talented John C. Tibbetts. I recognized him immediately. He was the KU professor who taught me the only film class I've ever taken. As I said, we can't hide from our passions. They lead us down sometimes unexpected paths. This past weekend, mine led me to Iola, Kansas.