The Marx Brothers~ a Paramount Pinnacle 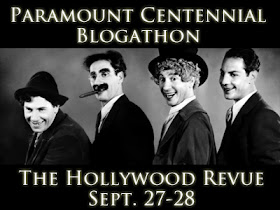 This year marks a momentous landmark, the 100th anniversary for Paramount Pictures. The lovely Angela of The Hollywood Revue created a remarkable blogathon to celebrate this historic occasion- the Paramount Centennial Blogathon. When I consider the parade of outstanding talent that has been a product of Paramount across the decades, the Marx Brothers serves as a shining pinnacle of hilarious proportions.

Four of the five Marx Brothers made films at Paramount: Groucho, Chico, Harpo, and Zeppo. (Only eldest brother Gummo was not involved.) The Marx Brothers made six films with Paramount studios. Yes, that's right, six. Most folks refer to five as the number of Films the Marx Brothers made at Paramount. But technically speaking, they made a short film that was included in Paramount's twentieth anniversary documentary, THE HOUSE THAT SHADOWS BUILT (1931), with an adapted scene from I'll Say She Is. The Marx Brothers started as a vaudeville act on the stage. By the mid 1920's they hit Broadway with tremendous success. They also made a silent short, Dick Smith's HUMOR RISK (1921), which was the first film written by Jo Swerling, who later co-wrote IT'S A WONDERFUL LIFE (1947) and GONE WITH THE WIND (1940), among others. This silent was never released and is now a lost film; some say by Groucho's own hands who was displeased by its quality. 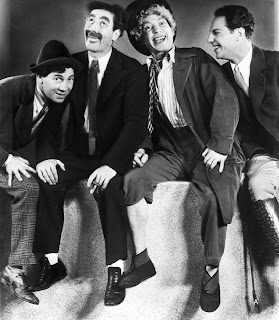 The first two Paramount films were adaptions of their Broadway hits, Joseph Santley and Robert Florey's THE COCOANUTS (1929) and Victor Heerman's ANIMAL CRACKERS (1930). The remaining Paramount films were not directly based on their stage productions:  Norman Z. McLeod's MONKEY BUSINESS (1931), Norman Z. McLeod's HORSE FEATHERS (1932), and Leo McCarey's DUCK SOUP (1933). In the midst of these yearly film releases, Groucho and Chico squeezed in a radio series, "Flywheel, Shyster and Flywheel". Considered lost until 1988, when all but one of the 26 scripts were discovered in storage at the Library of Congress. Then in 1996, a few of the actual recordings were discovered, including the very last episode aired. They used material from these radio shows for their future films.

Written by George S. Kaufman and Morrie Ryskind with music by Irving Berlin, this was their first 'talkie' of many to follow. Groucho portrays Hammer, a Florida hotel owner in the midst of a land boom in the 1920's, who unsavorily attempts to unload real estate on unsuspecting buyers. Zeppo is the desk clerk (Jamison), while Chico and Harpo simply make mischief. Chico joins Hammer in swindling up the price of his questionable real estate. This cues the well-known Why A Duck? scene, as other guests join in on the shilling:

Chico: "Well, you see, we come here to make money. I read the paper and it say, 'Big Boom in Florida,' so we come; we're a coupla big booms too."
Hammer (Groucho): "Well I'll show you how you can make some real money. I'm gonna hold an auction in a little while in Cocoanut Manor. Uh...you know what an auction is, eh?"
Chico: "Sure! I come from Italy on the Atlantic Auction." 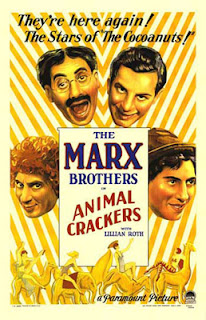 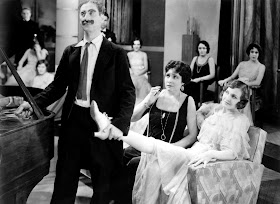 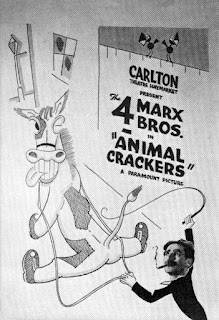 Also based on their popular stage production and with the same writing team of Kaufman and Ryskind, this one teamed up Bert Kalmar and Harry Ruby for the music and lyrics. The music number, "Hooray For Captain Spaulding" became Groucho's signature tune and later used in his long-running TV show, "You Bet Your Life." Some lines from the original lyrics to this song were deemed not Hays Code appropriate after 1934 so certain lines were deleted. The original lyrics can be found here: Hooray for Captain Spalding. Groucho takes the lead as African explorer and honorary guest at a Long Island party, Captain Spaulding. By his side is Zeppo as his field secretary, Jamison. Interestingly, this is one of the only films where Zeppo didn't play the straight or romantic role but was allowed to be funny. Margaret Dumont joins again, as Mrs. Rittenhouse. Chico plays Signor Emanuel Ravelli and Harpo plays The Professor. Add in music and thievery surrounding copies of Beaugard's "After the Hunt" painting, and the zany mayhem begins...

Groucho as Capt. SPAULDING: "As I say, we tried to remove the tusks. But they were embedded so firmly we couldn't budge them. Of course, in Alabama, the Tuscaloosa but that is entirely ir-elephant to what I was talking about." 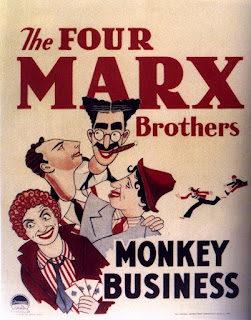 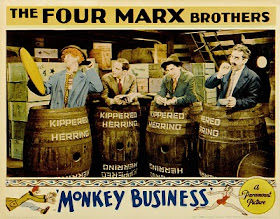 In the third Paramount film, the madcap brothers move from New York to Hollywood for filming. Written by S.J. Perelman, Will B. Johnstone and Arthur Sheekman, this film was stood apart from the others before with little focus on typical musical numbers and no Margaret Dumont. Yet it does include a fine supporting cast such as Thelma Todd. In this adventure, the Marx Brothers play stowaways on the high seas. The true premise of this film is really just a series of gags. (And if you're someone like me, the plot just gets in my way of enjoying a hilarious Marx Brothers' gag anyway.) MONKEY BUSINESS also claims the distinction of the only film where you can hear Harpo's voice, as he sings tenor from inside a barrel in the opening scene. Here, Ben Taggart as the ship captain falls prey into the gag trappings of Groucho...

Groucho: "I wanna register a complaint."
Captain: "Why, what's the matter?"
Groucho: "Matter enough. D'you know who sneaked into my stateroom at three o'clock this morning?"
Captain: "Who did that?"
Groucho: "Nobody. And that's my complaint. (pause) I'm young. I want gaiety, laughter, ha-cha-cha. I wanna dance! (sings) I wanna dance 'til the cows come home!"
Captain: "Just what do you mean by this?!"
Groucho: (ignoring the Captain) "Another thing...I don't care for the way you're running this boat. Why don't you get in the back seat for a while and let your wife drive?"
Captain: "I want you to know that I've been Captain of this ship for twenty-two years."
Groucho: "Twenty-two years, eh? If you were a man, you'd go in business for yourself. I know a fellow started only last year with just a canoe...now he's got more women than you can shake a stick at...if that's your idea of a good time." 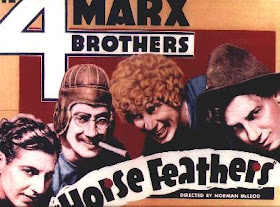 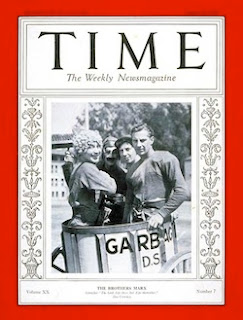 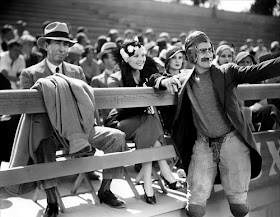 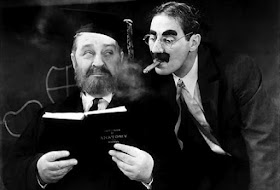 Written by Will B. Johnstone, Bert Kalmar, S.J. Perelman and Harry Ruby with Bert Kalmar and Harry Ruby handling music and lyrics, HORSE FEATHERS was their most popular film yet. They even nabbed a cover on Time magazine. Groucho plays Huxley College professor Quincy Adams Wagstaf and pokes fun at the entire college system and Prohibition throughout. Although his younger brother in real life, Zeppo plays Groucho's son and student, Frank. Convinced the only way to get winning football players is via a local speakeasy, Chico as Baravelli and Harpo as Pinky come in as mistaken identity. Thelma Todd joins the boys again as college widow Connie Bailey, as both father and son Wagstaff compete for her affection. Leading up to a zany football game, there are fun musical numbers and hilarious bits including Harpo's running gag where pulls almost everything out of his coat: a fish, rope, a poster of a woman in her underwear, a cup of hot coffee, a sword; and right after Groucho warns him that he "can't burn the candle at both ends," a candle burning at both ends. And of course the dialogue reflected that madcap mayhem, as in the famous 'Swordfish' scene:

Chico as BARAVELLI: "Hey, what'sa matter? You no understand English? You can't come in here unless you say 'swordfish'. Now, I give you one more guess." 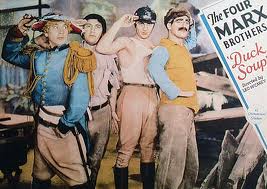 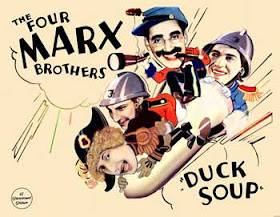 As the last of the Paramount films for the Marx foursome, DUCK SOUP marked the end of the Paramount relationship. Although now considered one of their best, it was actually a flop at the box office, causing Paramount to end their contract. It also marked the end for Zeppo as the fourth on-screen brother of the Marx Brothers. Tired of playing minor roles with little screen time, Zeppo went on to join his older brother Gummo as they created one of the biggest talent agencies in Hollywood. Additionally, this film marked the return of character favorite, Margaret Dumont.

A political farce taking place in the fictional country of Freedonia, this film takes on the comedic portrayal of waring countries and revolution in the most bizarre, silly and sometimes surreal fashion. There are funny bits from great supporting cast like Louis Calhern and Edgar Kennedy. It includes hilarious scenes like the famous 'Mirror' scene. And as always, you can count on the dialogue to keep you in stitches...

When I think of the Marx Brothers, I'm reminded that they represent one of my earliest cinematic memories, along with Saturday mornings of Our Gang, the Keystone Cops, Laurel and Hardy, W.C. Fields and Abbott and Costello. The Marx Brothers kept me laughing out loud and helped form my sense of humor. I've always shared that comedy is my favorite genre of film, classic or modern. I delight in the fact that I can watch the Marx Brothers to this day and still laugh out loud, just as heartily as when I was a little kid. My childhood was peppered with its share of challenges yet laughs from Groucho, Chico, Harpo and even Zeppo helped me navigate through life with a silly, sunny outlook. I guess I can thank Paramount Pictures in part for that!